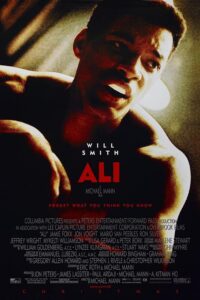 Based on the period from 1964 to 1974, this film depicts the most tumultuous decade of Muhammad Ali’s (Will Smith) life. In 1964 Ali won the heavyweight championship from Sonny Liston (Michael Bent), then years later had his boxing license and championship title stripped when he refused to join the Army during the Vietnam War. But in 1974 Ali capped off a heroic comeback by winning the heavyweight crown for a second time by defeating George Foreman during “The Rumble in the Jungle” in Zaire.