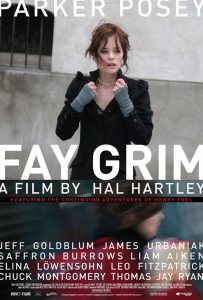 Plot: A ten-years-later continuation of Hal Hartley’s “Henry Fool”, where Fay Grim (Posey) is coerced by a CIA agent (Goldblum) to try and locate notebooks that belonged to her fugitive ex-husband (Ryan). Published in them is information that could compromises the security of the U.S., causing Fay to first head to Paris to fetch them …
Runtime: 118 min
Release Date: 27 Sep 2006