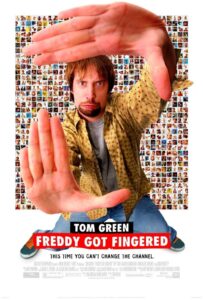 MTV icon Tom Green co-writes, directs and stars in FREDDY GOT FINGERED, a film he calls a “touching story of a young man who desperately wants to make his daddy proud.” Gord’s desire to please his father comes from his special – well, ok, bizarre innocence. He also has an endearing sense of curiosity about everything, whether it’s getting way too friendly with a horse on a stud farm, dancing inside a deer carcass, or wreaking havoc inside a hospital delivery room. Gord’s just an overgrown boy with a wild sense of imagination. But when the 28-year-old Gord decides he wants to be an animator, quits his job at a cheese factory and returns home to live in his parents’ basement, his father is neither amused nor proud. Dad thinks Gord is a slacker and should give up his dream of “doodling” for a living, grow up, get a real job and get the hell out of the house. But Gord won’t budge, and father and son embark on an all-out war that ends up taking them halfway around the world. FREDDY GOT FINGERED is not based on Tom Green’s life. However, actual events during his rise to fame in his native Canada did inspire some of his ideas for the film. Five years ago, Green was 24 and living in his parents’ basement, volunteering at the local cable access channel, and trying to get his series, “The Tom Green Show,” off the ground. Green’s father, a military man who had been working full-time since he was sixteen, couldn’t understand why his son was still living at home and wasting his time with his TV show when Tom should have been out looking for a real job. “The Tom Green Show” did, of course, turn into a real job and hit TV series, with Tom’s father and mother often finding themselves as surprise – or, more accurately, surprised – guests on the program.