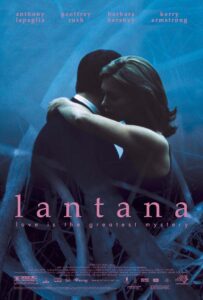 The film, called by some a more somber, Australian version of Robert Altman’s Short Cuts, follows five married couples through their ups and downs. At the center is Geoffrey Rush, who plays a lawyer fighting to save his marriage (to Barbara Hershey) after the murder of their only child. When his wife strangely disappears, he becomes the center of a criminal investigation led by a detective (Anthony LaPaglia) who’s dealing with his own marital woes.