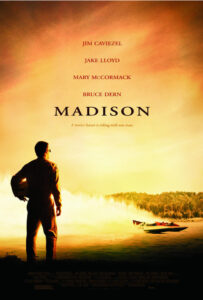 Madison is a father-son action/drama based on the inspiring true story of the tiny river town of Madison, Indiana and its legendary efforts during the hydroplane racing season of 1971. In addition to the thrills of 180-mph flat-bottomed boat racing, the picture captures the spirit of a small American River town struggling to stay alive as water transportation has virtually disappeared. In 1971, Jim McCormick (Jim Caviezel) has left the dangers of hydroplane boat racing behind him in favor of a wife, a family and a job as the town’s air-conditioner repairman. But deep inside, the dream of once again piloting the community-owned Miss Madison lives on. Sadly, like the town of Madison itself, the Miss Madison is a shadow of her former self. Several years old and in constant disrepair, the boat has become the laughing stock of hydroplane racing. And the make matters worse, Madison’s competitors on the circuit, such as the Miss Budweiser, have rich corporate sponsorships, top-of-the-line equipment, round-the-clock maintenance and huge, well-paid crews. The Miss Madison struggles to even make an appearance in the distant cities of Seattle, Chicago and Miami where the boats must race. When Madison, on a fluke, is offered the chance to host the prestigious Gold Cup championship, it’s too much for McCormick to resist, even though no one else on the circuit wants them to do it – or thinks they can afford it. But McCormick rallies his community in an attempt to bring exposure and excitement to the dying town. Along the way, Jim must deal with a skeptical town, a demoralized crew, a wife, Bonnie (Mary McCormack), eager to move the family to a big city economy, and a progressively more disillusioned son, Mike (Jake Lloyd), tired of always being the underdog and watching big money wing out over big heart at every race. But McCormick is not to be deterred. With the help of his right hand Tony (Brent Briscoe), and a reluctant favor from long retired boat mechanic Harry Volpi (Bruce Dern), he stubbornly marches on. Not only does the town step up to the plate and host the race with aplomb, they offer the rest of the teams a glimpse to small town charm and hospitality. And while for Jim McCormick the opportunity to race again is sweet, sweeter still is getting the chance to show his son the importance of being proud of who he is and from where he comes.