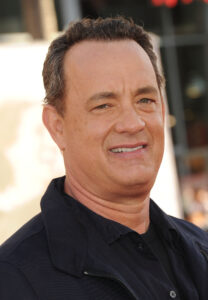 Thomas Jeffrey Hanks was born in Concord, California on the 9th of July, 1956. Hanks’ mother was of Portuguese descent and his father had English ancestry. His parents divorced in 1960 and Tom went to live with their father.

In his childhood, Hanks often moved, and by the age of 10, he had lived in 10 different houses. Hanks studied theater at Chabot College in California. He told New York magazine in 1986:

“Acting classes looked like the best place for a guy who liked to make a lot of noise and be rather flamboyant. I spent a lot of time going to plays. I wouldn’t take dates with me. I’d just drive to a theater, buy myself a ticket, sit in the seat and read the program, and then get into the play completely. I spent a lot of time like that, seeing Brecht and all that.”

Tom Hanks began his career as an actor in 1978 when he starred in ‘The Two Gentlemen of Verona’ which he won Best Actor for. In 1978, he acted in various summer productions of Shakespeare’s plays and in the winters he worked for a theater company. He made his first movie debut in 1980 when he starred in ‘He Knows You’re Alone’.

The following year, Hanks got a chance to perform in the television sitcom ‘Bosom Buddies’ which earned him critical acclaim. His performance as a 13-year old boy trapped in the body of a 35-year old man in Penny Marshall’s ‘Big’ (1988), was lauded and he soon began appearing in blockbuster hits.

Hanks lost 37 pounds for the film and his performance won him an Oscar and an MTV Movie Award.

In 1994, Hanks played the leading role as Forrest Gump which he won the Academy Award for his role in the movie.

In 1988, he teamed up with director Steven Spielberg for his first time where he performed a challenging role in ‘Saving Private Ryan’ that got him his fourth nomination for the Academy Award for Best Actor.

Hanks also caught attention when he was cast in ‘Bad of Brothers, an HBO mini-series and in ‘A Tribute to Heroes’.

A few years later, he played the role of the famed Robert Langdon in the sequel of ‘The Da Vinci Code’ the second movie ‘Angels and Demons’. He was the executive producer of the 2012 film ‘Game Change’ which is about the 2008 presidential campaign.

Here are some of the best highlights of Tom Hanks’ career: